I have been a Minnesota Viking fan since I was a little kid. Being born and raised in Packer country, that is really not something you admit out loud too often. Buttttttttt, the Slackers, err the Packers, even, have done such an incredible job of looking like chit, I decided I had the right to brag :D Minnesota is going to the playoffs, are the Packers? Nope. Granted the Vikings will probably get their butts spanked in the first game, but they still made it further than Green Bay did.

Posted by Easily Lost at 7:00 PM No comments:

This is snippet from an interview Clint Eastwood had with CNN.

CNN: When you read the script, were you at all concerned about the nature of the language?

Clint Eastwood: No, I wasn't. If you're going to learn something and progress in the movie as a character, you have to start as something else in order to learn tolerance. And your character obviously is never too old to learn that, so he has to be a certain way.

But I -- being politically incorrect -- I find [it] fascinating because I hate the so-called PC thing. I think that's one of the things that's damaging our generation at the present time. Everybody is taking themselves and everything so seriously. If they just relax a little more and take themselves and everything else a little less seriously, they'd have a lot more fun.

Full interview can be found here.

I could not agree more with that. People are getting way to wound up on the little things. Everything you say, do, or wear is going to bother someone. Get a life, live a little.

My favorite winter picture so far.

This one was taken at 10:30 Sunday morning. It is by far, my most favorite shot, that I have taken this year of snow scenes. 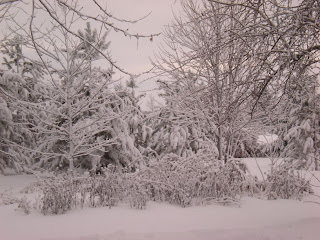 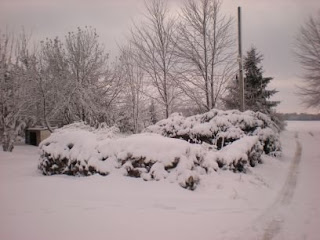 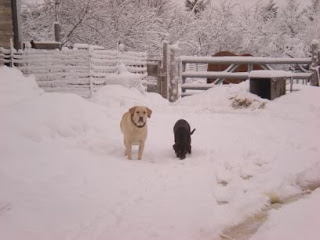 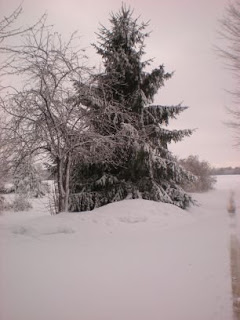 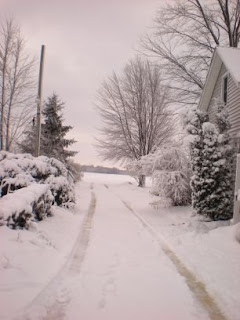 We went from rain and dense fog yesterday, to this today. Don't you just love Mother Nature's sense of humor. 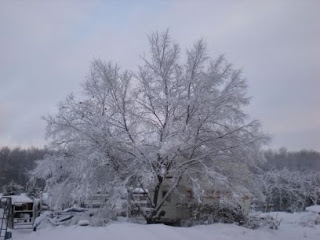 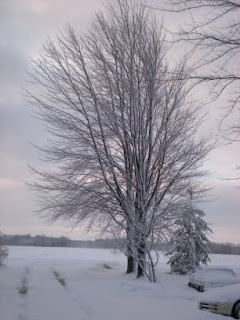 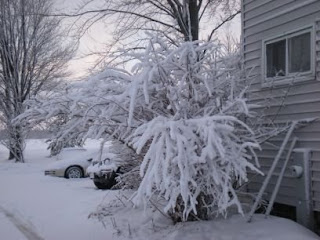 Posted by Easily Lost at 9:01 AM No comments:

This color is about what it looked like at 8:00a.m. this morning. No visibility at all. When I let the dogs out, they literally disappeared from sight. Later in the morning, it started raining. So now we have a layer of ice then a layer of slop, which makes driving a real challenge. Later tonight it is suppose to start snowing heavily. So the slush will freeze on top of the ice, and the snow will cover the frozen slush. There is nothing better than driving down a snow covered road with hidden frozen ruts. Our motto, out here in the middle of nowhere is "keep it between the trees". Believe it or not, some days, that is exactly how we drive. You can't see the road edge, so you literally try and keep it between the trees.

Posted by Easily Lost at 5:56 PM No comments: 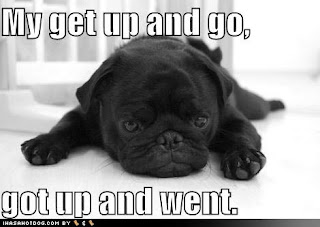 And that is how I feel after taking my daughter post Christmas shopping.
Posted by Easily Lost at 7:36 PM No comments:

May you and yours have a very wonderful holiday. Whichever one it is you celebrate. As a friend of mine likes to say........May you get everything you need. And half of what you want :D

Here's some new pictures of the boys. 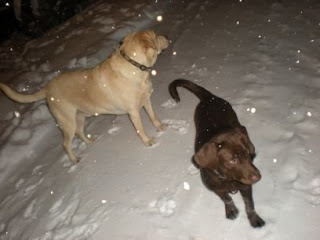 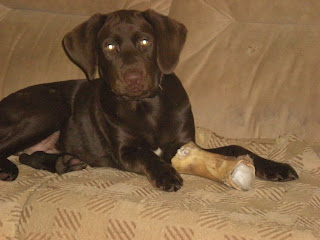 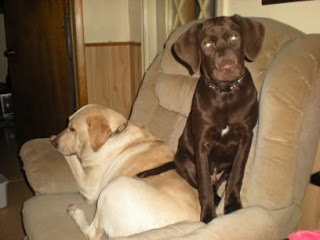 walking in a winter wonderland 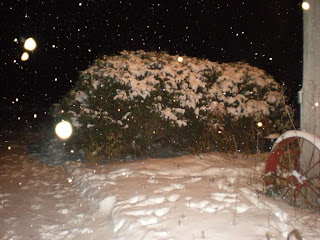 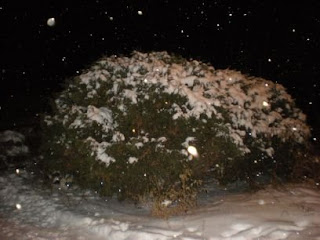 Posted by Easily Lost at 6:43 PM No comments:

REMEMBER THIS AT CHRISTMAS TIME
According to the Alaska Department of Fish and Game, while both male and female reindeer grow antlers in the summer each year, male reindeer drop their antlers at the beginning of winter, usually late November to mid-December. Female reindeer retain their antlers till after they give birth in the spring. Therefore, according to EVERY historical rendition depicting Santa's reindeer, EVERY single one of them, from Rudolph to Blitzen, had to be a girl. We should've known... ONLY women would be able to drag a fat-a$$ man in a red velvet suit all around the world in one night and not get lost.


This does not surprise me in the least.
Posted by Easily Lost at 2:49 PM No comments:

The remains found in a wooded area last week in Orange County, Florida, are those of Caylee Anthony, authorities confirmed at a news conference Friday.

Caylee Anthony, 2, has been missing since June in a case that has received national attention.

The announcement marks the end of a six-month search for the 2-year-old.

"It is with regret that I'm here to inform you that the skeletal remains found on December 1 are those of the missing toddler," Orange County Medical Examiner Dr. Jan Garavaglia said.

She said the cause of death was homicide, but she could not determine how Caylee was killed.

Casey Anthony, 22, faces charges including first-degree murder in the June disappearance of her daughter. Remains described as being those of a small child were found last week a half-mile from Casey Anthony's parents' home, in the area where a meter reader first directed police.

I know the mother was arrested but has yet to be convicted. The evidence hasn't been brought out yet, and everyone is presumed innocent, until proven otherwise. But when they do convict someone, I hope they have a very slow, very painful death. Whether it be by the government or other means. I don't believe in vigilante justice often, but when a child is involved, All Bets Are OFF.

The last week or so has been unbelievably cold out. Wind chills in the minus 30 degree category. Now they are calling for more of that white crap. If we aren't getting buried, we are getting frozen like popsicles. If it was up to me, I would be somewhere on a nice island. Where the temp never drops below 80, there are no insects, and no creepy crawlies. Wishful thinking I know, but hey, it's my fantasy. Oh yeah, and if I can't have Vin Diesel there, then I want a huge library of books :D

Posted by Easily Lost at 8:47 PM No comments:

Just one more for this week. I saw it and figured what the heck.

Your result for The What type of MAN turns you on Test...

You love men, you love testosterone and you know it. You like a bad-ass man who knows what he wants. He isn't what you might bring home to mom but I don't think it really matters - he's hot! Someone like.....Vin Diesel.


Ohhhhh yeah. Dead right on this one :D

Posted by Easily Lost at 8:33 PM No comments:

Test Who You Are in the Steampunk Ether City of Salmagundi

Your result for Test Who You Are in the Steampunk Ether City of Salmagundi...

You are Arcanist-Major Edmund Ras of the Praxian Alliance, assigned as liaison to the Legion of Peace. You are a scholar, a scientist, and a sorcerer, in a city that distrusts the first two and despises the third. Though you are kind-hearted and concerned about the betterment of others, the hostility you routinely encounter has left you jaded and sardonic. You have a sharp tongue and a very dark sense of humor, and you delight in mocking those with irrational fears and prejudices. Your outlook on life teeters between the optimistic and the resigned, and you still can’t decide if humanity is worth the trouble. Still, even if humanity is doomed to self-destruction you are willing to risk your life to give it just one more generation.

In honor of my law enforcement buddies and bloggers, I give you 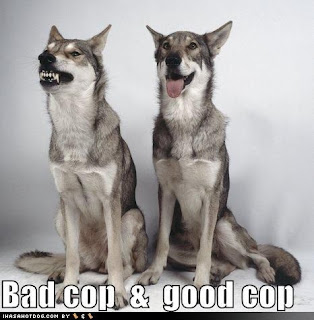 Posted by Easily Lost at 6:48 PM No comments:

Well it was bound to happen, it does every year. We got hammered by a storm. Estimates are now up to 10-14 inches by the time it stops, somewhere around midnight tonight. Being the smart cat that I am, I decided to stay home. Pretty much every school in the area is closed, except my daughter's tech school. She's not going in either though. So, seeing as my family is safe at home, I give you Let It Snow by Frank Sinatra

Well it's another balmy day here in Wisconsin. The thermometer says it's 2 degrees out, but we have lots of sun and no wind. So it doesn't feel that cold. The dogs played in the snow for awhile, the puppy still isn't sure what to make of it.
They are calling for a major snow storm starting sometime tomorrow into Tuesday, with accumulations heading towards the 8 to 10 inch mark. I just love having to be on the road at 4 a.m. after a big blow like that, because the plows usually haven't been out. It's a contest between me and Mother Nature to see who retains control of my jeep. So far I have been extremely fortunate in winning. But then I also only drive at a snail's pace. Don't want to give her any more advantages then she already has ;)
Living way out in the middle of nowhere, we might see a plow sometime on Thursday, by then most of the snow will be packed down and polished to a high glass shine. By then end of December our road should resemble Wyatt's hockey rink. Bring the skates boys, it's party time.

A good Aussie friend of mine sent me some funnies. I will post a couple for your amusement. 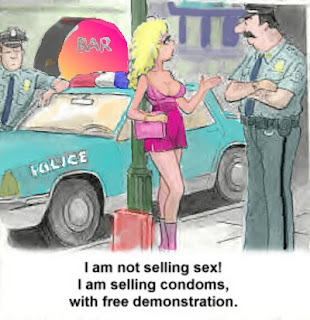 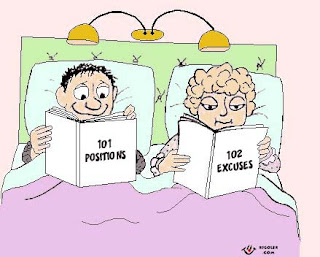 Posted by Easily Lost at 7:25 PM No comments:

Baby it's cold out there

Got up this morning and checked the weather. It was 1 degree outside. Why bother giving us that one stinking degree? Do you think it makes us feel all warm and fuzzy inside? Well it doesn't! My jeep complained rather loudly at having to start, and I don't blame it one bit. I didn't want to start either. Good thing I have Fridays off and only had to drop the daughter off at school as her car is in the shop getting new tires. Ran to the store, picked up some things we needed, and high tailed my frozen butt home.
I am so ready for summer. The hotter the better. Not a good sign seeing as how winter hasn't even really started here yet.
(thinks warm thoughts, the kind that don't land you in jail :P )

Two of my favorite bloggers have each welcomed a daughter into the world. Pop on over and congratulate Wyatt and Jumpout.

Posted by Easily Lost at 6:23 PM No comments: