My daughter was playing with the new camera and snapped the following "awwwwwww" moment pictures. Including the one of her and Tucker. (note the actual grin on her face, it is NOT something you see often :P ) 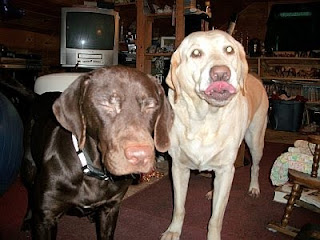 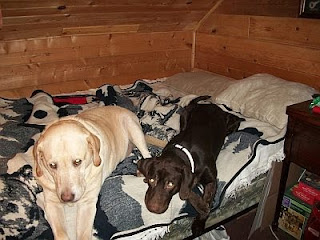 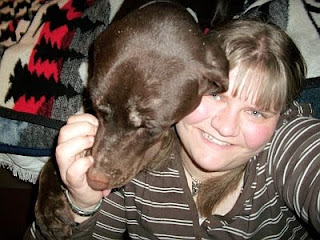 I received the following in an email from a friend
(yes I have a couple :P )

If you need a good laugh, try reading through these children's science exam answers...

Q: Explain one of the processes by which water can be made safe to drink.
A: Flirtation makes water safe to drink because it removes large pollutants like grit, sand, dead sheep and canoeists.

Q: How is dew formed?
A: The sun shines down on the leaves and makes them perspire.

Q: How can you delay milk turning sour? (Brilliant, love this!)
A: Keep it in the cow.

Q: What causes the tides in the oceans?
A: The tides are a fight between the Earth and the Moon. All water tends to flow towards the moon, because there is no water on the moon, and nature hates a vacuum. I forget where the sun joins in this fight.

Q: What are steroids?
A: Things for keeping carpets still on the stairs.

Q: What happens to your body as you age?
A: When you get old, so do your bowels and you get intercontinental

Q: What happens to a boy when he reaches puberty?
A: He says good-bye to his boyhood and looks forward to his adultery. (The kid gets an A+ for this answer!)

Q: What does the word 'benign' mean?'
A: Benign is what you will be after you be eight.

Is Your Baby Racist? 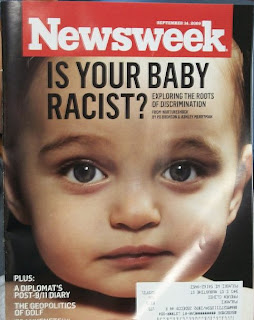 The latest headline from Newsweek magazine. I was floored when I saw the title. Like we don't have enough people screaming about this, now they claim your baby judges people on the color of their skin as early as 6 months old. Don't we, as a collective society, have more than enough to deal with right now, than to worry about how an infant judges someone???? Like how the government is trampling the Constitution of the United States. Or how a majority of politicians are more corrupt then the criminals sitting in prison right now? Or how about that national healthcare bill they are trying to shove down our throats. Or maybe that bailout of billions upon billions of dollars that was suppose to some how rejuvenate the now crippled economy. Nahhhhhhhhhh, let's worry about how 6 month old babies relate to someone. That is so much more important.

The full article can be found here .

What do a box clamp, a table, a utility knife, and a cardboard box have in common?
They all got a chunk of me today. It seems every time I turned around today, I was getting cut, bruised or scratched. Thank gawd tomorrow is Thursday.
Posted by Easily Lost at 6:51 PM 3 comments:

Probably his best known performance was in Dirty Dancing. I know that is the one movie that shoots to the front of my mind when I hear his name. The man was tough, really tough. He continued working through it all. And even refused pain killers during the filming of "The Beast".

More can be found here
Posted by Easily Lost at 7:28 PM 3 comments:

Like anyone will ever forget, where they were, or what they were doing. I was currently laid off from one job, and filling in at my part time job at the restaurant. I was heading to work that morning, when they came on the radio with the news. I actually had to fight with myself not to turn around and head back home. Once I got to work, I tried calling my family on my cell phone, but it wouldn't go through. We had the televisions going, so we saw exactly what was going on. There were a few customers in that morning, but they too were more interested in what was on the tv, then their breakfast. The only sound was the reporter and the live feed of the destruction, as it happened.
The Eagle Tear picture I am posting was created back then. I truly wish I knew who designed it, because I would love to give them full credit.

It's been relatively uneventful here, which is always a good thing. I managed to watch part of the Presidential speech last night, without falling asleep. Although I did make a few comments about how many time Pelosi jumped to her feet. Does that woman have springs in her shoes or what? They could have shaved 20 minutes off of the time needed, had they just let the man talk without interrupting him every other sentence with applause. Oh well, we'll see what happens now.
Posted by Easily Lost at 1:37 PM 3 comments:

Found this little gem over at Beat and Release.
Obama now wants to hire a contractor to monitor what is said concerning the govt on social networking sites like twitter, facebook and so forth. Like asking citizens to turn in dissenters on his health care bill wasn't enough.

The National Legal and Policy Center, or NLPC, revealed the White House New Media team is seeking to hire a technology vendor to collect data such as comments, tag lines, e-mail, audio and video from any place where the White House "maintains a presence" – for a period of up to eight years.
"The contractor shall provide the necessary services to capture, store, extract to approved formats, and transfer content published by EOP (Executive Office of the President) on publicly-accessible web sites, along with information posted by non-EOP persons on publicly-accessible web sites where the EOP offices under PRA (Presidential Records Act) maintains a presence," the posting states.

Full article can be found here.

So, freedom of speech is being carefully monitored (we knew that), and copyright laws are being trampled into the ground. Because as most people know or SHOULD know, you own the copyright to any picture you personally take. That includes video and audio (the law says so right there) IT IS YOURS. No one has the right to borrow/store or use it in the future, without your permission.

If the great and powerful Obamasiah wants to go on an all expense paid (for by the US citizens) fishing trip, he is going to need much better bait.
Posted by Easily Lost at 10:40 AM 2 comments:

I was surfing the web for a quote or poem and came across this little gem. When I was done reading it I pondered how closely it relates to current society's thinking. A world full of people, who think they are entitled to everything for nothing.

Her jowls shiver in accusation
Of crimes cliched by Repetition.
Her children, strangers
To childhood's TOYS, play
Best the games of darkened doorways,
Rooftop tag, and know the slick feel of
Other people's property.

Too fat to whore,
Too mad to work,
Searches her dreams for the
Lucky sign and walks bare-handed
Into a den of bureaucrats for her portion. 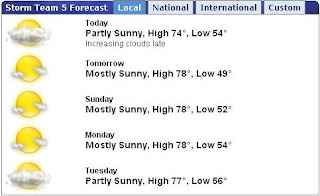 Who could ask for more beautiful weather for a four day weekend. Not me, that's for sure! I think I will open all the windows and let mother nature in for the next few days. Get some fall cleaning done, maybe spruce the yard up some also.
Posted by Easily Lost at 10:13 AM No comments:

It is officially the start of a four day weekend :D
Posted by Easily Lost at 5:51 PM 1 comment: